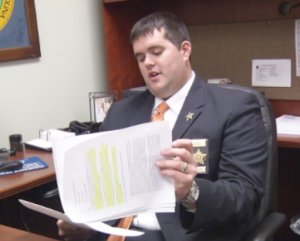 Sheriff Chris Davis said ever since he came into office, security in the courthouse has been a priority.

“For far too long, courthouse security has not received the attention that it deserves in Pamlico County,” Davis said.

Sheriff Davis created a proposal which he presented in front of county commissioners on Monday. Security improvements include upgrades to cameras, the addition of metal detector screening and one-way locking doors.